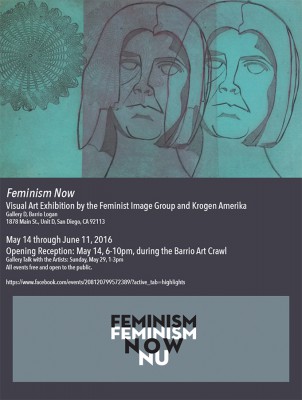 Opening Reception: May 14, 6-10pm, during the Barrio Art Crawl

Members of the San Diego Feminist Image Group and the Swedish Group Krogen Amerika present artworks that explore multiple visions of what
Feminism is today, in the context of Southern California and Northern Europe.
Artists address the complexity of gender equality through themes such as
sexism, body image, class, race, politics, spirituality, domesticity, biology,
and history.

This exhibition will travel to Sweden in 2017.

The Feminist Image Group was formed in 2009. FIG is a coalition of San
Diego visual artists who meet to discuss art, see exhibitions, and support one another in our careers. We work across many media, including drawing, painting, photography, sculpture, installation, digital media and performance. The group has had exhibitions at San Diego Mesa College, Art Produce Gallery, Hyde Gallery at Grossmont College, Art San Diego Artfair, and has an upcoming exhibition at the Women’s Museum of California.

“Krogen Amerika” is the name of a Swedish printmaking group in the region of Östergötland in Sweden. The group works out of a a red wooden house from 1704 in the very center of the Swedish city of Linköping. During the years, it has functioned as a private home, a local pub, and a meeting place for emigrants to America (hence the name of the house, “Krogen Amerika”). Now it is a fully functional printmaking studio and art gallery. This artist-run gallery and studio space is partly funded by the city of Linköping. About 20 artists work here, and also together manage the space, with the support from the local community. The gallery exhibits artists from all over Sweden. Krogen America has exhibited as a group at Norrköpings Museum, Östergötlands Museum, Grafiska Sällskapet,  the Palo Alto City Hall, Odense Konsthall Danmark, Berlin Kunstfactor.